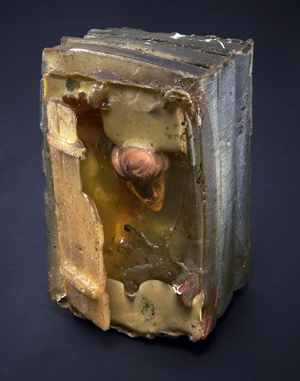 In recognition of National Library Week (April 4-10) and the age-old sibling relationship between museums and libraries (their shared origin dates back more than 5000 years to ancient Mesopotamia, where books were objects, and their words and information recorded in clay), we highlight the work of Stella Waitzkin (1920-2003), an artist who celebrated the objecthood of books as few other artists ever have.

In the mid-1960s, she turned from abstract painting to making hundreds of sculptures in cast polyester resin, molded in the form of books. In time, she created a vast personal “library” environment that eventually filled her apartment in New York City’s famous Chelsea Hotel. Her thousands of books-that-can’t-be-opened turned her apartment into a kind of twilight zone between reality, surrealism, and illusion.

Besides the Gregg Museum, which has eight fine examples, many other major museums hold important Waitzkin works in their collections, including the Museum of Modern Art, the Corcoran Gallery, the National Gallery, the Smithsonian American Art Museum, the Walker Art Center, the Cranbrook Institute of Art, and the Israel Museum. To learn more about the artist’s life and see the “library” in her Chelsea Hotel apartment before it was dismantled, visit tinyurl.com/waitzkinatthechelsea and http://stellawaitzkin.com/.

The Gregg’s contribution to April Fools Day – a tour of our drawers!

Starting April 13th, timed-entry reservations will no longer be needed for groups of 15 or less.

The power of art: creating awareness, educating and inspiring us to be better humans.