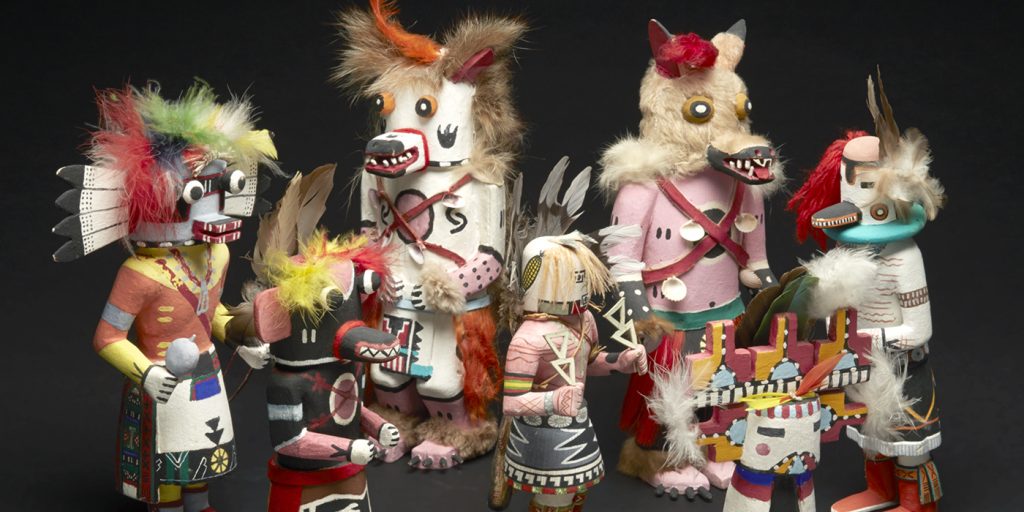 The objects exhibited in the Drs. Norman and Gilda Greenberg Native American Arts Collection Study Room, in the Thomas E. Cabaniss Historical Residence, offer a but a glimpse into the riches represented by this major gift of Native American art from the Greenbergs to the Gregg Museum.

As a young Marine during World War II, Norman Greenberg spent three years in the South Pacific, before returning to New York to marry Gilda Morgenstein (in 1947) and to earn his first degree, in music, on a full scholarship to Julliard. For the next seven years, they remained in New York while Norman played French horn with the Skitch Henderson and Victor Borge Orchestras, the New York Philharmonic, Radio City Orchestra, and the New York Brass Ensemble. During this same time, he pursued parallel interests in Sociology and Anthropology at Columbia University, while Gilda completed master’s degrees in Counseling at NYU and in Social and Philosophical Studies at Columbia. 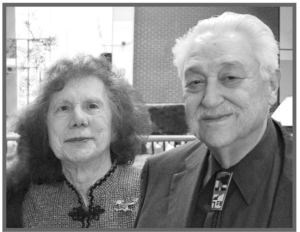 In the late 1940s the Greenbergs began traveling to the Southwest, where their encounters with Native Americans convinced them to seek careers in public service that would allow them to expand their cross-cultural experiences. In 1953, at considerable financial sacrifice, they left New York and accepted positions with the Bureau of Indian Affairs in Bááháálí (Bread Springs), a remote community in New Mexico, where they established a school for non-English-speaking Navajo children. Here they also began collecting locally-made artworks, often acquiring these objects from the artisans directly – native makers who were still living on ancestral lands, pursuing traditional lifeways and speaking their original languages.

The Greenbergs then earned doctorates from the University of Colorado, Boulder, in 1962. Over the following years, they both held academic and administrative positions at universities in Arizona, New Mexico, Tennessee, and Michigan. At Western Michigan University, Norman was a professor of anthropology and Senior Advisor to the President for International Affairs, while Gilda held a joint appointment as a professor of humanities and social science. After they retired from teaching in 1992, they returned to Santa Fe, New Mexico, to accept appointments as Senior Research Associates at the Museum of Indian Arts and Culture and the Laboratory of Anthropology. They continued collecting artworks, and eventually amassed a major collection that represented some 22 Native American cultures.

In 2002, the Greenbergs moved to Durham, NC and soon became patrons of the Gregg Museum, eventually deciding to support the museum with a major gift.

In 2009, they began donating Native American art objects, and in the following year, helped to establish an endowment bequest to create a permanent “Drs. Norman and Gilda Greenberg Native American Art Study Center” at the Gregg’s new home at 1903 Hillsborough Street. In addition to textiles, jewelry, basketry, pottery and other artifacts, the collection includes thousands of anthropological slides, and hundreds of books, files and other materials collected by the Greenbergs over the years. It represents over seventy years of art collecting by the Greenbergs, and is the only center of its kind in the state.

The Study Center, located in the former Chancellor’s study of the Thomas E. Cabaniss Historical Residence, features a large exhibition case that displays examples of pottery, basketry and other objects. There is a recessed display case, currently housing a selection of Hopi katsinam. Beneath this case are several visitor exploration drawers that house a selection of Native American jewelry and basketry. A large wall case currently houses a large basket tray. The exhibits are changed periodically, and there is a collection of reference materials from the collection also on display.

Download Guides to the Katsinam, Drawer and Shelf Exhibits.

Watch a brief video describing selected objects from the Native American Collection, as featured in the book Show & Tell – Celebrating the Collections of the Gregg Museum of Art & Design