EXPLORATIONS features the work of Christina Lorena Weisner, who incorporates scientific instruments, found objects, and elemental materials into her sculptures and installations, often integrating the equipment’s original functions in her work. “Ideally [my] sculpture will encourage viewers to consider the macro and micro processes through which we interact with the physical world on a daily basis. I consider myself a process-oriented artist,” she says. “I choose to begin with an object rather than a concept. … The objects I choose simultaneously reflect the nature of matter itself and humanity’s determination to make use of and understand it.”

Weisner uses scientific instruments, scientific processes and approaches as a vehicle to better understand complex natural phenomena like earthquakes. One of the works on display incorporates ocean seismometers that not only measure vibrations caused by visitors in the gallery but also pulls data from the USGS’s website, and then signals the sculptural array to respond by ringing glass spheres. Another is a mechanized sculpture incorporating a sonar device used for exploring the sea floor; and several others deal with a massive meteorite impact that formed Europe’s largest cosmic crater (the Ries Crater).

Weisner’s work invites the viewer to consider the deep geological time of water, rocks and the landscape to the more fleeting temporality of living beings through objects, scientific instruments, technology and scientific discovery. 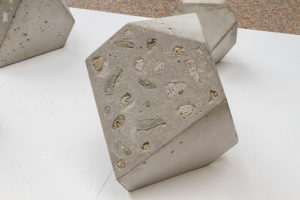 Christina Lorena Weisner is an Assistant Professor in the Department of Fine Arts at the College of the Albemarle. She received a Bachelor of Fine Arts (BFA) in Sculpture and Bachelor of Arts (BA) in World Studies from Virginia Commonwealth University (2006) and a Master of Fine Arts (MFA) in Sculpture and Ceramics from University of Texas at Austin (2010). In 2013 – 2014, Weisner was awarded a Fulbright Grant for Sculpture and Installation Art to Germany, where she worked on a series of site-specific sculptures based on the Ries Meteorite Impact Crater. Her work often employs found objects, scientific instrumentation and elemental materials, and has been shown both nationally and internationally, most recently at Humboldt University in Berlin, Germany and the Mint Museum in Charlotte, NC.